Infographic: How Much Cash Do You Carry? 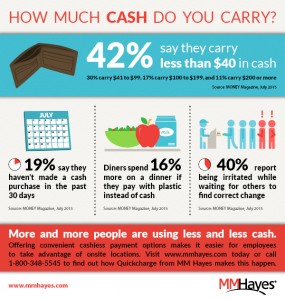 How much cash is in your wallet right now? Chances are it’s not a very large amount, according to survey results in the July 2013 issue of MONEY Magazine. When the magazine asked readers how much cash they carry, 42% responded that they only carry between $1 and $40. Some of the other statistics MONEY shared seem to show the downfall of cash even more. Take a look at the infographic below to see how often we’re choosing cashless payment options instead of cash.

No End in Sight for High Credit Card Fees 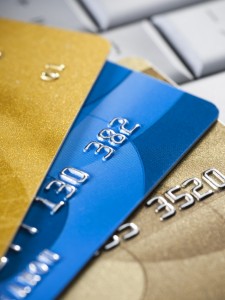 Credit card fees have always been troublesome for retailers, but a recent settlement between card issuers and merchants means those fees are about to become a bigger problem. The settlement is the result of a massive anti-trust case brought by retailers against financial firms such as Visa and MasterCard. The card issuers were accused of unlawfully fixing “swipe fees” – the fees the merchants are charged every time a customer pays using a credit card. Merchants had hoped to see lower swipe fees, but the settlement only requires an eight-month reduction in those fees. The settlement also allows retailers to pass those fees on to customers by adding a credit […]