Cash is dirty. That won’t come as a surprise to anyone; we all know it. Just thinking about how much a bill or coin has been circulated and what it’s come in contact with is enough to make you panic, even if you don’t generally think of yourself as a germaphobe.

A 2002 study found that 94 percent of the bills tested were contaminated with bacteria. Most of those bacteria are harmless, but 7 percent of the bills carried dangerous pathogens like Staphylococcus aureus and E. coli. Money can be a rather hospitable environment for these pathogens, too: on most surfaces viruses and bacteria live for around 48 hours, but the flu virus can survive on paper money for up to 17 days. Concern about the cleanliness of money is so high in Japan that ATMS that can sanitize yen were introduced in the 1990s.

The Federal Reserve regularly tests money and removes from circulation those bills with a high “soil content,” so the average life span of a dollar bill is 5.9 years. That may seem fairly short, but it’s still a long time for a bill to be accumulating dirt, grime, and worse. And older bills are also more susceptible since their increased numbers of creases and folds harbor more bacteria. 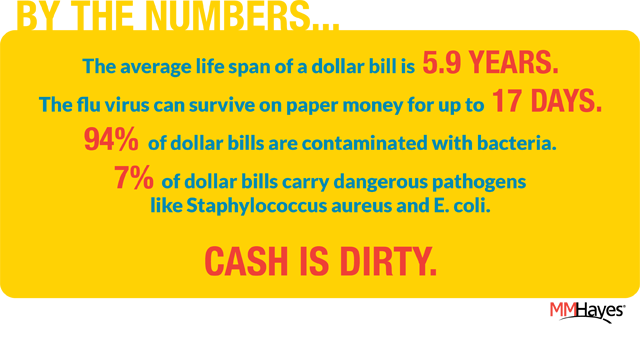 While there’s no need for an individual person to worry too much about the contents of their wallet, the unsanitary nature of cash is a valid concern for companies and organizations, especially those where cleanliness is important. The food service industry has always tried to ensure that workers don’t handle food after handling money, but guaranteeing that every employee follows company policies at all times is next to impossible. Some restaurants are starting to eliminate cash altogether, streamlining their payment processes while also eliminating any concern about “dirty money.”

The biggest concern is for organizations where cleanliness is an absolute necessity, such as laboratories, hospitals and other healthcare organizations, and pharmaceutical companies. In these locations, introducing something like Staphylococcus aureus by handling cash would be a disaster. For pharmaceutical companies, cash can even cause problems during FDA or similar inspections; if cash is accepted at a company cafeteria or other locations the company must be immaculately careful with handling procedures. Failure to handle cash properly could result in violations during an inspection.

Since accepting cash can present such a big risk for healthcare and pharmaceutical companies, offering cashless payment options is of vital importance, and going entirely cashless is an appealing option which is often seen as the safest course of action.