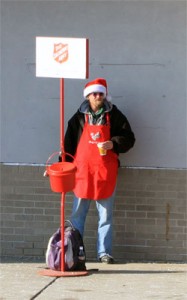 This time of year, Salvation Army bell-ringers are a familiar sight (and sound!) outside of stores and on street corners. One sight that might not be quite so common is the “cashless red kettle” – a variation on the traditional Red Kettle stand that also includes a credit card reader.

As our society has become increasingly cashless, the Salvation Army saw a drop in donations. The organization has adjusted by offering alternative options like the cashless kettles, which were first introduced in 2008.

Other high-tech options include donating via text (similar to the fundraisers the Red Cross conducts for disaster relief), and the option to set up an “online kettle.”