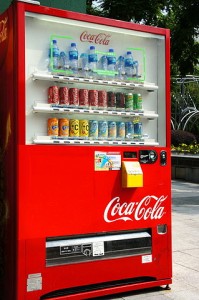 In 2011, Google attempted to make a splash in the tech world with the release of Google Wallet, the first mainstream mobile wallet feature available in the United States. Google put a lot of effort into making the Wallet a success, but in the months since its inception, the Wallet has largely fallen short of expectations due to a number of circumstances. But don’t count out the Wallet just yet.

In November, Google partnered with Coca-Cola to showcase how a mobile payment option can be used with the beverage giant’s new cashless vending machines. The two companies hosted simultaneous events in New York City and San Francisco to give people the opportunity to see the cashless payment system in action and try it out for themselves. Google allowed the curious onlookers test the system using the Nexus S smartphone, and the users received free Cokes for their efforts.

Coca-Cola is one of Google’s most important partners in its Wallet initiative, and is itself looking to provide its customers with more flexibility to purchase its products. To this end, Coca-Cola has developed the SWIPE vending system that the company says is more cost-effective than using third party payment partners. SWIPE not only allows cashless solutions at vending machines, but also has the ability to connect to customers’ loyalty programs, including Coca-Cola’s own My Coke Rewards.

For now, Coca-Cola only has a few hundred cashless vending machines across the country.  Google Wallet only launched a year ago and by the time of this event was only active in one device, the Nexus S smartphone.  (It has since launched in a number of other devices.) Coca-Cola expects cashless solutions to take off in the next few years, and will continue to expand its cashless offerings to provide more flexibility for its customers.