Facial Recognition in Less Than a Second 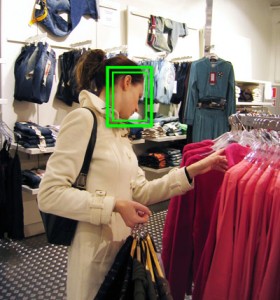 In the future, stores could use facial recognition software to identify customers who may be “big spenders.”

Facial recognition software is nothing new, but a company called FaceFirst may have found a way to vastly increase its potential uses. FaceFirst recently debuted facial recognition software that can identify faces in less than a second. The process begins by freezing a frame from a live video feed and zooming in on a face. From there, the software encodes the face in order to compare it to a database and present potential matches.

FaceFirst has demonstrated how their algorithms work quickly enough to identify and introduce a meeting attendee before he even reaches his seat. Identifying employees within a company in that manner could be very useful for access control systems, but the potential uses of FaceFirst actually extend much further due to the software’s speed.

One possibility is for retail stores to use the software to identify potential shoplifters, or customers who may be “big spenders.” The database of faces that the software uses can include multiple sources, from external lists like Homeland Security’s terrorist watch list to proprietary lists generated by the user. This means the system can be used for both security purposes and for uses that a specific company chooses. For example, if a store logged information on a customer who decided against a big purchase, the system could help identify the customer on a future visit and a salesperson could approach the customer to let him or her know about a sale on the item. Uses like this could present benefits for consumers as well as for organizations.

Of course, systems like this raise many questions about privacy. Facial recognition cameras are subject to the same laws as normal surveillance cameras, but the idea of having any information connected to their photos still makes many people wary. Privacy concerns will likely be a major obstacle for companies like FaceFirst moving forward.

Would you be okay with a store using facial recognition software to connect your photo to your shopping habits, or do you think that’s going too far? Would you stop shopping at a store that used that technology? Tell us what you think in the comments!