By now you’ve likely heard about the controversy surrounding Chipotle and their rounding policies – in an effort to save time, the burrito chain has stopped dealing in pennies at many locations. Initially, totals were rounded to the nearest nickel, regardless of whether that meant rounding up or down. However, this policy was not publicized, so customers began to notice that their receipts weren’t quite adding up with no explanation for the discrepancy.

In the wake of the scandal, Chipotle has revised their policies; they’ll now be rounding down to the nearest nickel but never rounding up. In addition, receipts now include a line that clearly indicates the amount deducted for rounding.

While Chipotle certainly slipped up by not being straightforward with their policies, the idea of rounding to eliminate pennies is not necessarily a bad one. In fact, it might be a step toward eliminating pennies altogether: earlier this year, Canada made the decision to stop minting pennies, and many believe the U.S. might be poised to follow suit, especially since each U.S. penny actually costs 2.41 cents to produce and distribute. 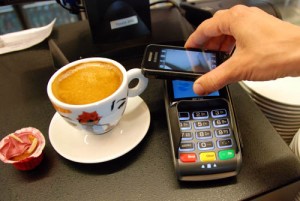 Mobile payment options are among the many ways fast-food chains are attempting to increase speed.

For a fast-food chain like Chipotle, rounding – as long as it’s done in a non-deceptive manner – might be a good way to speed up cash transactions. Cashless payment is much faster, but of course some customers still prefer to pay in cash, so increasing the speed of those transactions can help keep lines short, especially during the lunchtime rush. And it’s hard to argue with Chipotle’s speed – last quarter, the chain processed an average of six more transactions during the lunch hour, beating its previous record.

Chipotle isn’t the only fast-food establishment trying to increase speeds, either. Many chains are introducing new methods to speed up their processes – and you may notice that a lot of these ideas are taking advantage of the speed of cashless payment!